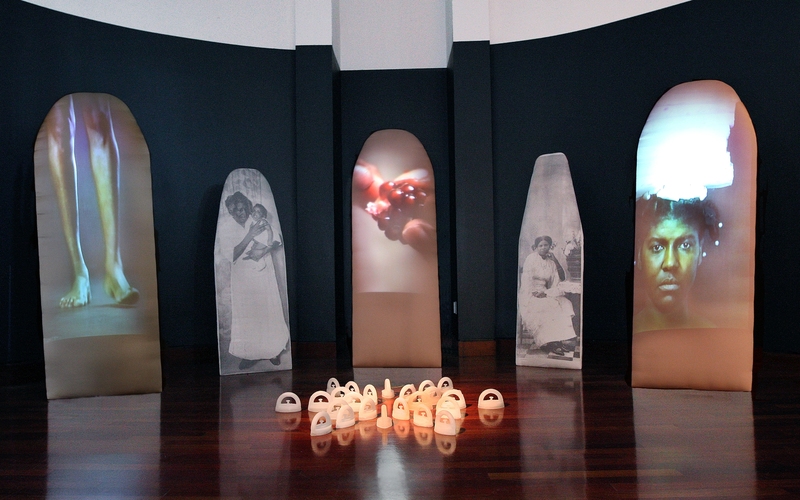 María Magdalena Campos-Pons was born in Matanzas, Cuba, in 1959 and is based in the Boston area, where she is professor at the School of the Museum of Fine Arts, Boston. Campos-Pons’ celebrated work draws inspiration from her Afro-Cuban family and ancestry, as well as imagery from the syncretic religion of Santería, which incorporates elements of Yoruba belief systems. Her work has engaged with themes of diaspora, displacement, and identity.

Spoken Softly With Mama II employs objects associated with domestic work, including ironing boards and irons, as the backdrop for projections of intimate videos featuring the artist’s mother, as well as other images of women in Campos-Pons’ family—all of whom were employed as domestic workers. The personal nature of Campos-Pons’ inclusion of her own mother conjures a general feeling of home and its association with the love, nurturing, and warmth of motherhood, particularly in a domestic setting. This allusion to motherhood is also a reference to Africa, a “motherland” for peoples of African descent. The shape of the ironing boards that line the walls evokes the ships used to transport enslaved Africans during the Transatlantic slave trade. Spoken Softly With Mama II thus explores not only Campos-Pons’ personal memory of the matriarchs of her family, but also considers the notion of “home” from the diasporic perspective of an individual of Yoruba descent, whose ancestral ties to Africa were forever changed as a result of the slave trade.