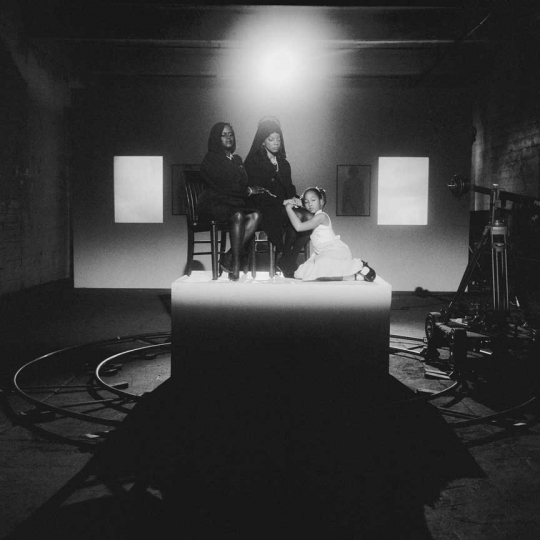 Carrie Mae Weems’ Mourning, part of her 2008 Constructing History series, is a prescient work that addresses the police brutality and violence against black lives that we are still fighting today. The work focuses on a young girl resting her head on the lap of an older, maternal figure, seated next to another adult woman. The two older women are clothed in mourning dress, while the young girl is adorned in white, hinting at a state of innocence and purity. The three-figure composition of Mourning overtly references historical Christian iconography, such as the Pieta (depicting the Virgin Mary holding the dead body of Jesus), and other traditional Madonna and child scenes. This spiritual motif is enhanced by the appearance of a halo around the central female figure’s head, and the dramatic use of light above the seated trio. The work also reveals a highly constructed “stage set” that surrounds this central group, suggesting that the mourners are in the limelight, and making viewers aware not only of the contents of the scene, but also of the fact that it has been photographed. Mourning is highly reminiscent of the iconic image of five-year-old Bernice King being comforted on her mother’s lap during Martin Luther King’s funeral in 1968.

The older women and young girl are united through linked arms and hands, as well as a seemingly shared sentiment of sorrow and loss. Yet the image also suggests a possibility of renewal through Weems’ use of light, and through bodies that form an also architectural triangular tower of familial strength and protection.