4. William Anderson, Playing in the Ghetto

4. William Anderson, Playing in the Ghetto 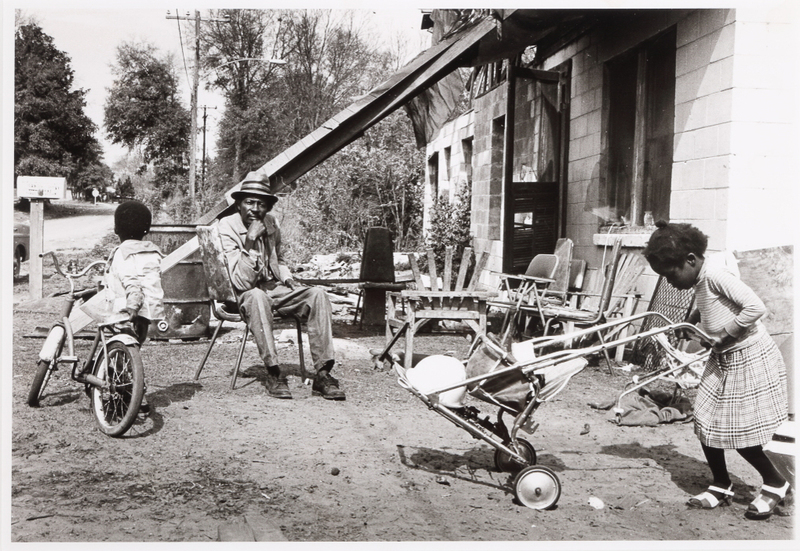 William Anderson, born in 1932 in Selma, AL, is a prolific sculptor, printmaker, painter, and photographer. At an early age, he drew cartoon characters and carved sculptures from soapstone found at a creek near his childhood home. Later, after some years spent pursuing sculpture, he shifted his practice to photography, and he continued to shoot with film cameras after the emergence of digital photography, using the older medium to infuse his images with complex texture and depth. Anderson has received numerous professional awards, including the Shuston-Gimbel Award for study in 1961–1962, and the Henry Bellamann Foundation Grant for sculpture in 1966 at Instituto Allende, San Miguel, Mexico, where he earned an MFA degree. Anderson’s works across these mediums have engaged themes of race, Southern life, and civil rights issues. Playing in the Ghetto, shot in Georgia, depicts an adult male figure and several young children in a rural yard. The father figure, seated at center, appears stoic and thoughtful while joyful, active children cavort around him. In many ways, the work appears to focus on releasing one’s inhibitions in an environment of safety, comfort, and parental warmth—an effect that contrasts with stereotypes conjured by the work’s title, which suggests that such areas are often depicted as perilous or disenfranchised.