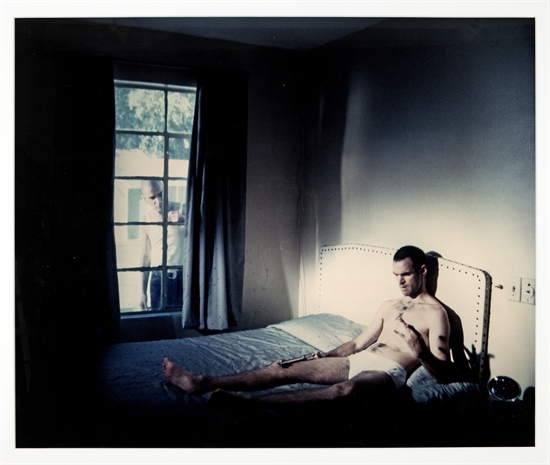 Critically acclaimed filmmaker and video installation artist Isaac Julien was born in London’s East End in 1960. He graduated from St. Martins School of Art, where he studied painting and film, earning a BA in 1984. His groundbreaking, lyrical works have long challenged the boundaries of artistic disciplines, while addressing issues of race, class, and sexuality. In 1983, he co-founded the Sankofa Film and Video Collective with Martina Attille, Maureen Blackwood, Nadine Marsh-Edwards, and Robert Crusz, all fellow graduates from various art colleges and polytechnic universities in London. Sankofa’s members were part of a wave of black independent filmmakers who emerged in 1980s England. In 1989, Julien produced Looking for Langston, a pioneering filmic essay on Harlem Renaissance chronicler Langston Hughes and Black gay male communities in 1920s Harlem. The groundbreaking project brought him heightened international attention.

Untitled (Newcastle-on-Tyne), set in a residential area in northeastern England, is a nocturnal, film noir-inspired scene that features two well-dressed men seated next to each other on a bench. Their close proximity to each other and comfortable seated poses contrast with the meticulously placed spotlight above and the enveloping darkness around them, providing tense drama in this intimate, otherwise relaxed moment. Here, home may be defined not as a physical, indoor destination, but by the warmth of interpersonal relationships that provides shelter even outdoors, or in darkness.