When Being Seen is Not Enough: Changing the Social Justice Narrative in Black Portraiture

This section focuses on Black portraiture as it relates to social justice. In American society, Black people are often the focus of portraitures in the context of social justice and/or photos depicting violence. This causes others to associate Black people with violent situations, usually as the offenders; thus, Black people are cast as defectors of the system. Many photos of protest are viewed as problematic rather than trailblazing with the intent to create a better society for all. Many topics could have been exhibited when referring to focusing on the Black gaze. Still, the relationship between Black people and criminality is intriguing and immensely relevant in the wake of the sociopolitical movement, Black Lives Matter.

I want to analyze these social justice photographs positively, highlighting the contributions made to society. There is a long history of Black social justice portraiture with a modern re-awakening during the Civil Rights Movement, which starts as a good reference point. Moving to the present day and hopes for the future, I look at protests and Black political activists to complete the section. There are influences from Gordon Parks' "Untitled" in Dana Scruggs' portrait of Stacey Abrams, and Kay Hickman's Black Lives Matter protests photo on the Williamsburg Bridge. Scruggs and Hickman follow Parks in focusing on protesting police brutality and the use of black and white imaging. 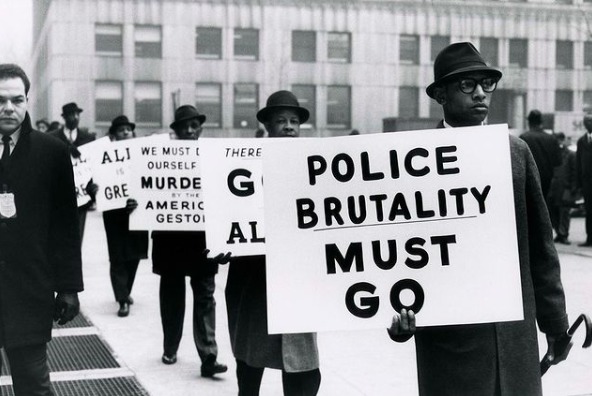 This 1963 untitled photograph by Gordon Parks depicts a protest against police brutality. Parks was a photographer of the Civil Rights movement, documenting Black demonstrations and experiences. He recorded people's social conditions in the United States and believed his camera to be a weapon against injustice. Though much of the Civil Rights movement is shown in the South, this photo was taken in New York City, showing the more urban side of the period. This highlights the usage of signs and lines of people instead of an arm and arm march that is usually displayed. This black and white untitled photograph provides a link unbeknownst when police brutality is an ongoing problem for Black people now. 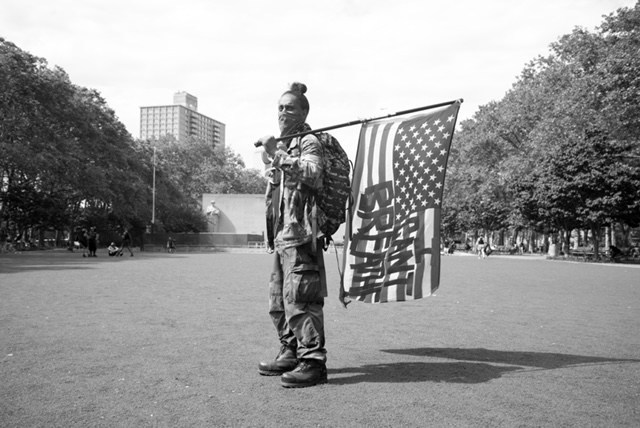 Kay Hickman is a New York-based artist who focuses on Black experience relating to health, human rights, and identities. This black and white photo by Kay Hickman depicts a Black Lives Matter demonstrator in attendance of a ceremony for George Floyd. This photo is an excellent example of protest against police brutality what the American Flag is supposed to represent by contrasting it with violent actions of those who are supposed to uphold the country's order. The subject's stance is unwavering, placing him in a position of empowerment, typically not afforded to Black people. 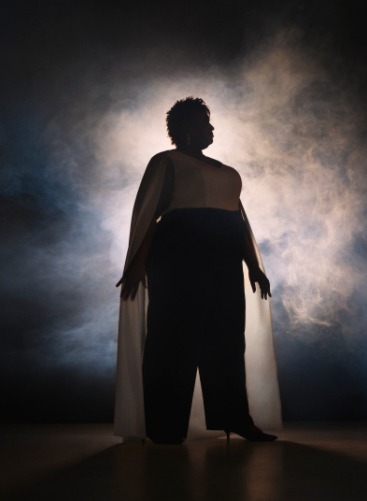 Pictured is Stacey Abrams, a politician based in Georgia. The silhouette of Abrams was shot in 2020 by Dana Scruggs. Scruggs is a photographer based in New York who has made history as the first woman to shoot ESPN’s Body Image and the first Black person to shoot a Rolling Stone cover. This primarily black and white photo is a powerful depiction of Abrams, meant to highlight her activist work of countering voter suppression, especially in the then-upcoming 2020 election. Abram’s positioning in a powerful stance to be looked up to, dressed in a white robe with a halo-like light behind her engenders the feeling of a savior as she is referred to, of the US democracy.

This exhibition allowed me to combine history, which is near and dear to my heart, with curatorial work and social justice work. It has been crucial for me to incorporate different aspects of my studies with one another. I have enjoyed all of the learning I have done in this class, including working on this exhibition. Though I am new to this, I leave with more confidence and knowledge than I had previously. I never knew who any of these photographers were before now. I have seen some of the photos I looked at but never really considered those behind the camera and how they contribute to the documenting of social justice work through the years. Other formative parts of this class were the readings of Dr. Nicole Fleetwood and her visit. I had never considered the art produced by incarcerated people, and I never knew of the photography that allows families to hold memories with their loved ones in the carceral state. Learning about what is done to incarcerated people and their creations were quite the wakeup call, especially knowing I had never thought of the subject. Her visit to the class was eye-opening and showed me that you could relate art and curatorial practice to whatever you're passionate about.

Along with Dr. Fleetwood's readings, I was helped a lot by the Code of Ethics for Curators. It helped me to build the foundations of my curatorial practice with base rules. Though it seems like a big list of duties, it is something that will serve as a guidebook for my future work. The talk with Ms. Dodd's was also crucial for my professional future. Watching the discussion helped me better grasp networking and going after what you want to do. I hadn't thought about the jobs you want not having a title yet, because I assume they already have a title. This became a good lesson in going after what you want if other people haven't realized it. It was also powerful to hear the positivity of taking a short-term position to see if that's what you want to do. It feels like I have to have everything figured out long term, but brevity isn't the wrong thing I always thought it was.

All of this has set me up to go after what I want in the future. A big step in doing that is taking an Egyptian Art History course next semester to see if I can mold my curatorial practice to my love of studying Ancient Egypt. In the future, I hope to become a professor, but I also want to try new things. I want to take risks and see if I like conservation and/or preservation as much as I like archives. This class has pushed me in ways I didn't realize it would, and I will continue gaining skills to propel my future forward.

When Being Seen is Not Enough: In Control →
Changing the Social Justice Narrative in Black Portraiture