Fight For or Against the Oppressor?

As Wade J. Henderson, former director of the Washington office of the NAACP stated:

“African Americans are patriotic people and their commitment to the full freedoms of this country and to the protection of American interests has been strong. We are disturbed, however, that many African Americans see opportunities in the general society so severely constricted that for some, the military option is the only viable one.” (New York Times, 1991)

In a time of war, there are only but so many options to choose from. You either fight for what you believe is right or against what you think is wrong. Freedom is a driving force and causes people to do irrational things. These three documents that have been chosen, are a few examples to depict what life looks like for African Americans, pre-war, during, and post-war. The civil war was a very difficult period in America, specifically for the enslaved population. It was seen as a rare opportunity to fight for your master in hopes to possibly gain your freedom and break away from the union or fight against the Confederacy in hopes to keep the union together and legally end slavery in the south. For many African Americans, they saw the fate of the United States intertwined with the fate of black people. Prior to the start of the civil war, there were few abolitionists that fought for the abolishment of slavery, such as John Brown. John Brown raided Harpers Ferry with the expectation of gaining weapons and other armaments to give to slaves to revolt. Contrary to popular belief white men were some of the biggest abolitionists in the north and south. Their concerns were with good interest but for some, that just wasn’t enough. In certain situations, slaves were so naive and miseducated that they would fight for their master against those that were trying to help and protect them. Many asked why join the war and face more problems when there was already enough going on at home. Why join the war, why risk dying for a country that doesn’t love you? It never respected you, you have always been seen as property and inferior. Why now? You’re too inferior to read and write, but you're not too inferior to use a loaded gun? Those men who did make it home had a story to tell, and an accomplishment to celebrate. As illustrated in “De Jubilee Am Come” when African Americans returned home, they may not have been celebrated by everyone, but they were definitely celebrated by their own. The story of African Americans in war is a complex story of oppression, equality and want for freedom. 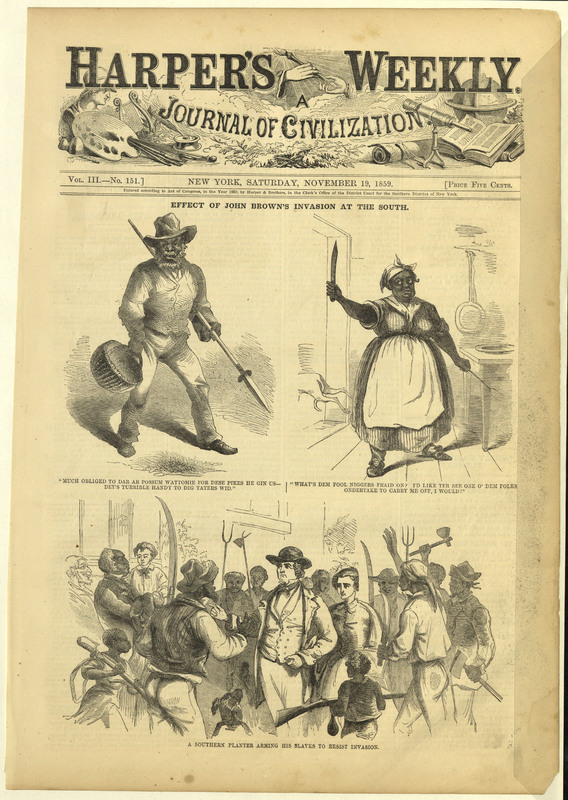 Newspaper, “Effect of John Brown’s Invasion at the South” by the 19th Century Newspapers Illustrations (Harper’s Weekly a Journal Civilization), 1859. As depicted in the image, planters and slave masters are trying to avoid invasion from people like John Brown. John Brown is most famous for his raid on Harpers Ferry. In which he led a small group in Virginia ( now West Virginia ) to a federal armory. He attempted to start an armed slave revolt in hopes to destroy the institution of slavery. After his attack, planters became very nervous of the thought of it happening again. They tried to avoid a domino affect, and turn slaves against the idea of fighting with abolitionist. They would rather arm a slave in hopes they would rebel against the raiders. Regardless of the fact they were raiding for the abolition of slavery. Planters and slave masters were very good at manipulating their slaves to believe whatever they wanted them to, and this was the outcome. The older lady depicted in the picture said “Whats dem fool niggers fraid on? I’d like ter see one o’dem folks ondertake to carry me off, I would!” This was known as the effects of John Brown’s Invasion. 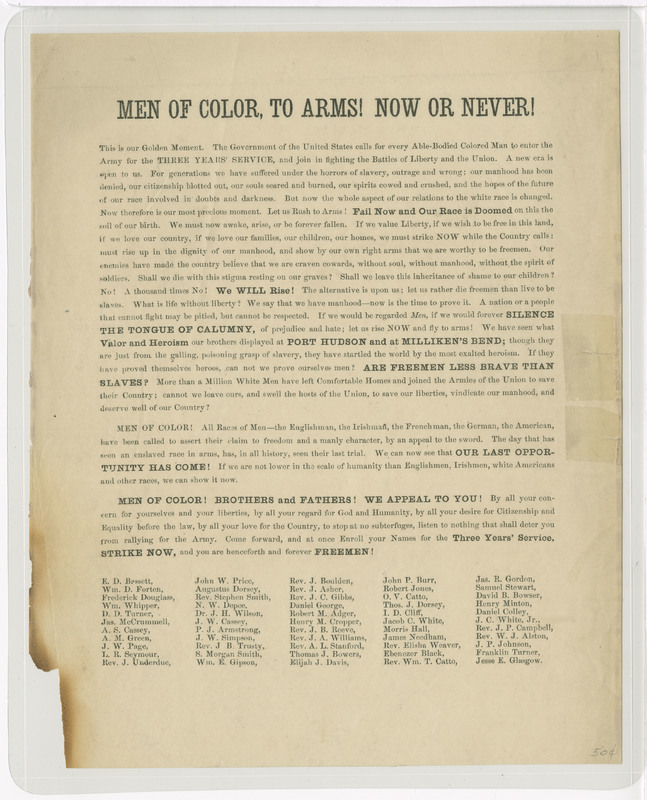 Article, “Men of Color, To Arms! Now or Never” by Henry P. Slaughter, 1863. This article discusses the opportunity that men of color had to join the fight for “freedom”. According to the article the government called for able bodied colored men to enter the army for three years service. He explains the whole aspect of their relations to white is changed. The question of leaving their homes to fight alongside their counterparts was proposed. In the name of freedom and equality, of course. Yet their calling to join the army is to prove to other races they are not lower on the scale of humanity. Joining the military was a brave decision for men of color, simply because even when they were fighting for the country, they still weren't given the respect they deserved. African Americans were faced with very unique issues and mixed reactions on the war front and home front. Not only did they face unique issues and reactions, it was literally fight to be able to die a free man or live to be a masters slave. The options were very clear, and opportunities clearer.  They had a chance to be seen as heroes like the brothers that fought at Port Hudson and Milliken’s Den. 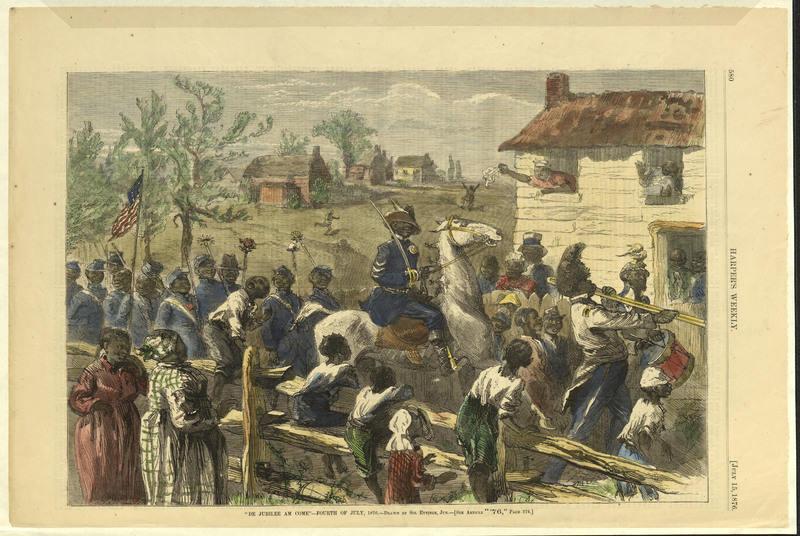 Caricatural Depiction, “De Jubilee Am Come”- Fourth of July by the 19th Century Newspapers Illustrations (Harper’s Weekly a Journal Civilization) July 15, 1876. This picture depicts a Fourth of July parade of African American Civil war veterans. There is a black general shown in the picture leading black troops. The parade includes a trombonist and drummer playing music to celebrate everyone's presence. This picture is meaningful because they’re celebrating “Independence Day” but the real independence day for colored people was January 1st due to Abraham Lincoln signing the Emancipation Proclamation which declared slaves in the south “Free”. There is also a sense of idolization captured in this painting because the little boys are surrounding the soldiers and lining up side by side reenacting what they see. Bystanders include several children and women standing behind the fence, along with people celebrating from within the cabin.

Fight For or Against the Oppressor?